BREEDING PROGRAMS TO SAVE SPECIES

The primary mission of modern animal parks is to actively participate in the conservation of endangered species. In order to organize and collaborate on a large scale for the survival of species outside their natural environment, animal parks have created breeding programs.

The EAZA (European Association of Zoos and Aquariums) then organized itself into a European network of animal parks in order to facilitate exchanges between member establishments and differentiated three levels of conservation programs : EEPs, ESBs and Monitoring. These programs apply to endangered species in order to establish a reproduction plan that takes into account the original natural characteristics and genetic heritage of the animals.

The main objective of breeding programs is to ensure a perennial captive population in order to serve as a reservoir for natural populations to be able to strengthen wild populations if no other conservation solution is possible. Often these programs also provide support for conservation programs for the same species in the wild.

WHAT IS AN EEP?

An EEP (= Ex situ programs) is a reproduction program for an endangered species. This program is managed by an European and / or an international coordinator who ensures the management of the species for which he is responsible. Assisted by its committee, its role is to identify all the individuals present in the animal park and to collect information in a genealogical register (Studbook). On this basis, it carries out genetic and demographic analyzes in order to submit its recommendations for reproduction and transfers to the parks.

The species specialist committee is also able to carry out scientific research and provide advice on the layout of enclosures, behavioral studies, medical follow-ups, etc.

WHAT IS AN ESB?

This involves the establishment of the European Studbook by a coordinator who collects all the information concerning the species for which he is responsible for management (births, deaths, transfers, etc.). These data are compiled in order to perform population analyzes. Thanks to the results, the coordinator can issue opinions on the appropriate transfers to be made between the different parks. By analyzing all this data, the person in charge can follow the evolution of the population of the species in Europe and can propose to transform the program into EEP if the need arises.

WHAT IS A MONITORING ?

This is a lighter level of monitoring put in place by EAZA which concerns species that are not very threatened in nature and whose management in captivity is not a priority. This corresponds to an inventory of animals present in animal parks.

EcoZonia takes full part in these programs. Temporary member of EAZA from its conception phase, our desire is to become actively involved in these breeding programs with the approval of this European organization. The park is also a member of the EEP committee for dholes (Cuon alpinus) and the monitoring of the African lion (Panthera leo).

As a new animal park, the predator territories present at EcoZonia have been designed according to the recommendations of the coordinators of the breeding programs. Thus, thanks to scientific advances and a constant increase in our knowledge of species, we are able to offer them a living environment that is fully favorable to the expression of their natural behaviors.

EcoZonia welcomes from its opening: 6 species in EEP and 4 species in ESB, more than half of the species highlighted! 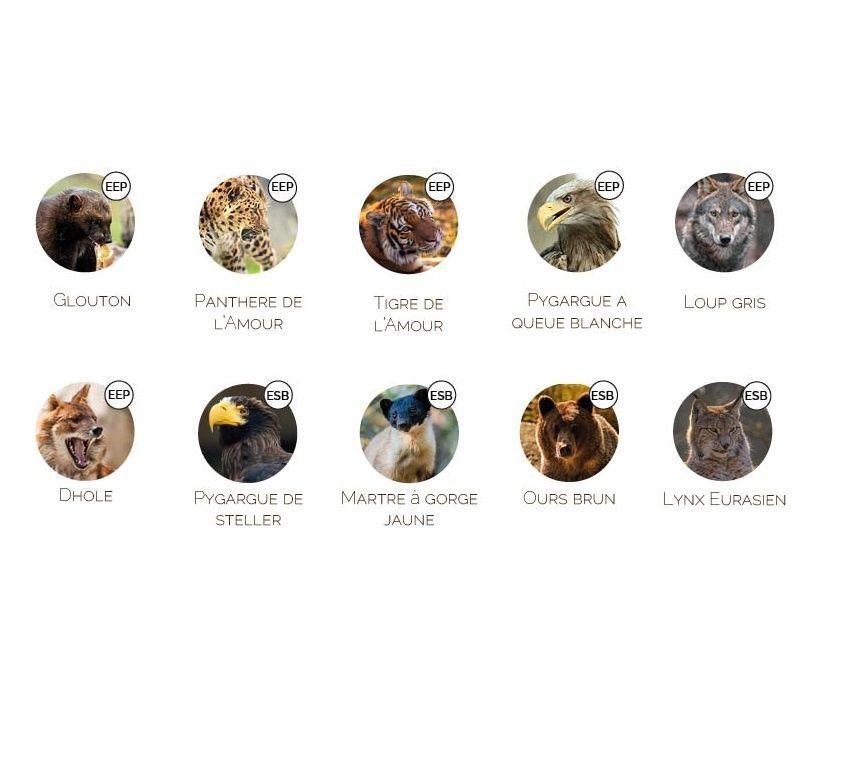